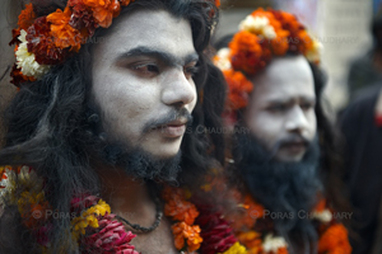 The Prayag Kumbh
This Kumbh is considered to be the most significant of all as it marks the direction of wisdom or light. This is the place where the sun, symbolizing wisdom, rises. Creation of the universe is supposed to have originated here and it is supposed to be the center of the earth. Prajapati Brahma, the God of Creation, is said to have created the Universe after conducting the Ashwamedh Yagna at the Dashashwamedh Ghat here. The Dashashwamedh Ghat and the Brahmeshwar Temple still exist here as if as symbols of that holy yagna, and that is another reason for the special significance of the Prayag Kumbh. In fact Prayag and Kumbh are synonymous to each other.
The Meaning of Kumbh
The literal meaning of Kumbh is a pitcher, but its elemental meaning is something else. Even as a symbol of pitcher, Kumbh is synonymous with holy activities as in daily life a pitcher (or kalash) is an integral part of all sacred activities in Hindu culture, and this pitcher is a symbol of Kumbh. Holy scriptures say that in a pitcher, its mouth (opening) symbolizes the presence of Vishnu, its neck that of Rudra, the base of Brahama, all goddesses in the center and the entire oceans in the interior, thus encompassing all the four Vedas. This itself establishes the significance of the Kumbh as symbolized by the pitcher.

Different Forms of Kumbh
We shall not dwell upon the literary meaning of the word Kumbh, but we would like to mention the synonyms and origins. The Kumbh is a pitcher. Kumbh is the human body, it is the abdomen, and the sea, earth, sun and Vishnu are synonyms of Kumbh. The pitcher, sea, river, ponds and the well are symbols of Kumbh as the water from these places is covered from all sides. The sky has the cover of the wind, the sun covers the entire universe with its light, and the human body is covered with cells and tissues. That is why it is Kumbh. Desire, that is longing, is also Kumbh. God Vishnu is also Kumbh as He pervades the entire creation, and the creation pervades in Him. 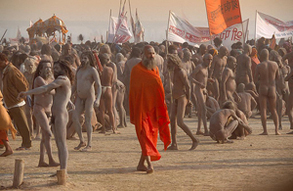 Kumbh is the confluence of all our cultures. It is the symbol of spiritual awakening. It is the eternal flow of humanity. It is the surge of rivers, forests and the ancient wisdom of the sages. It is the flow of life itself. It is the symbol of the confluence of nature and humanity. Kumbh is the source of all energy. Kumbh makes humankind realize this world and the other, sins and blessings, wisdom and ignorance, darkness and light. Holy rivers are the symbols of the lyrical flow of humanity. Rivers are indicators of the flow of water of life in the human body itself. In the human body that is an embodiment of home, nothing is possible without the five elements. The elements – fire, wind, water, earth and sky – symbolize the human body. The great sage-poet Sant Kabir has explained this sublime thought in his typical manner.

The Himalaya is the abode of the soul of the gods. The Holy Ganga embarks upon its journey from there, encompassing the forests, the mountain sages and the culture of the villages. The Yamuna is a co-traveler as it puts an end to all sins, and it is known variously as Tripathga, Shivpuri and other names. This is the Ganga that liberated the children of the Suryavanshi king Sagar. Its holy water is considered nectar itself.

For More information about tour booking or Hotel or any other service s contact sankrittourzone@gmail.com or sankritabhishek@gmail.com or +91-964-800-0010