About Varanasi - Make your tour informatic and unforgettable with us 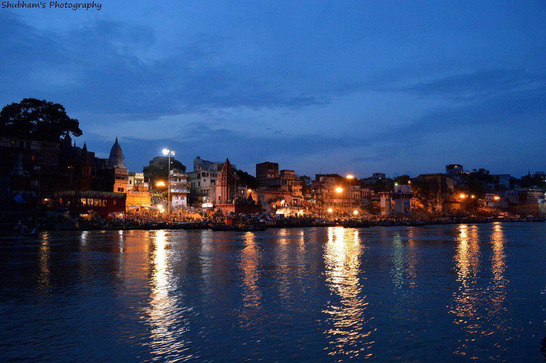 Varanasi or Benaras(also Known as Kashi) is one of the oldest living cities in the world. Varanasi's prominence in hindu tradition or mythology is virtually unrivaled. Mark Twain, the English author and literature, who was enthralled by the legend and sanctity of Benaras, He Once wrote about Varanasi   "Benaras is older than history, older than tradition, older even than legend and looks twice as old as all of the put together'.

According to ' Vamana Purana', the varuna  and assi rivers originated from the body of the primordial person at the beginning of time itself. The tract of land lying between this two rivers is believed to be "Varanasi", the holiest of all pilgrimages in hinduism.
The word 'Kashi' originated from the word 'kas' which means to shine. Steeped in tradition and mythological legacy,  Kashi is the 'original ground' creayed by Shiva and Parvati, upon which they stood at the beginning of time. varanasi is the microcosm of Hinduism, a city of traditional classical culture. Glorified by myth and legend and sanctified by religion, It was always attracted a large number of pilgrims and worshippers from times immemorial. To be in Varanasi is an experience in itself.. an experience in self discovery.. an ethereal oneness of the body and soul.
To every visitor, Varanasi offers a breathtaking experience. The rays of the dawn shimmering across the Ganges.. the high-banks, the temples and shrines along the banks bathed in a golden hue.. soul-stirring hymns and mantras alongwith the fragrance of incense filling the air..and refreshing dip in the holy waters gently spashing at the ghats(place for taking bath on bank of rivers). Varanasi - the land where experince and discovery reach the ultimate bliss.
Varanasi is also renowned for its rich tapestry of music, arts, crafts and education. Some of the world renowned exponents India has produced in these fields were schooled in Varanasi's cultural ethos. Luminaries apart, Varanasi abound in the art of silk weaving, an exotic work of art which manifests itself precious Banarasi Silk saree and Silk Brocades which are cherished as collector's item across the world today.  To book or get any tour information click here or write us at sankrittourzone@gmail.com or call us at +91-964-800-0010 (24 hrs helpline)